How Do Microbes Affect Nitrogen Use Efficiency? 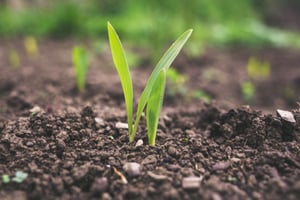 Despite best practices, an estimated 40% to 50% of applied nitrogen is unavailable to the crop due to immobilisation by soil microorganisms or loss from the soil through denitrification or leaching. Although some soil microorganisms contribute to this nitrogen loss or immobilisation in the soil, others can enhance the availability or stability of nitrogen in the soil or even improve root growth and physiological functions, all of which can have a positive influence on nitrogen use efficiency.

The Role of Biochemicals Produced by Microorganisms

Bacteria and other microorganisms exude or secrete a wide range of biochemical compounds called primary and secondary metabolites into the soil. These are not simply waste products or byproducts of microbial metabolism. They are the tools that enable microbes to communicate and function in the soil. Some of the ways they influence nitrogen use efficiency are by:

Enhancing root growth and root physiological functions. Roots can respond to signals from biochemical compounds in many ways, including by increasing growth and branching, increasing the uptake of nutrients such as nitrogen, or limiting the uptake of compounds such as salt ions. Roots can also respond to biochemical signalling in the soil by making changes to their own exudates. This can have an effect on rhizosphere bacterial functions that, in turn, may help make nutrients more available to the plant.

Derived from a microbial fermentation process, Foundation LM is a fertiliser biocatalyst that can effectively convert applied nitrogen into plant-available forms to increase nutrient availability and facilitate nitrogen uptake by the plant. It can also hasten crop residue breakdown and facilitate the cycling of nutrients—including nitrogen—back into the soil.

In a pivotal, third-party study in corn conducted over two years in the United States by a major seed company, Foundation LM* (which does not contain nitrogen) was associated with improved nitrogen use efficiency, increased nitrogen uptake by the crop (as seen in the chart below) and higher yields compared to adding more nitrogen to the grower's standard rate.

Foundation LM, along with other technologies and practices focused on efficiency, can improve a grower's nitrogen use efficiency by ensuring that more nitrogen gets into the crop. The Foundation LM biocatalyst technology compliments existing microbial processes already occurring in the soil, and can be easily incorporated into a grower's existing fertiliser program.

Learn more about the influence of soil biochemistry on plant health and nutrition by downloading our 'Understanding Soil Microbiology and Biochemistry' booklet.

*Sold as Accomplish LM in the USA.