In on-farm trials in grain sorghum, using a starter fertiliser consisting of liquid phosphorus and zinc with Foundation LM led to an average yield improvement of 653.50kg/ha (with an ROI of ~10:1) compared to no starter. The grower had previously trialled liquid starters—ones that did not include the Foundation LM biocatalyst—with no success.

The trials were conducted in G33 variety sorghum at three sites in Gurley, New South Wales. The soil was grey-black vertosol. Starter fertiliser with Foundation LM ("Liquid Boost Start") was applied at 7L/ha with water (80L/ha) and compared to water only (80-100L/ha). Yield data was collected by three S680 headers with GS3 and processed via Echelon.

END_OF_DOCUMENT_TOKEN_TO_BE_REPLACED 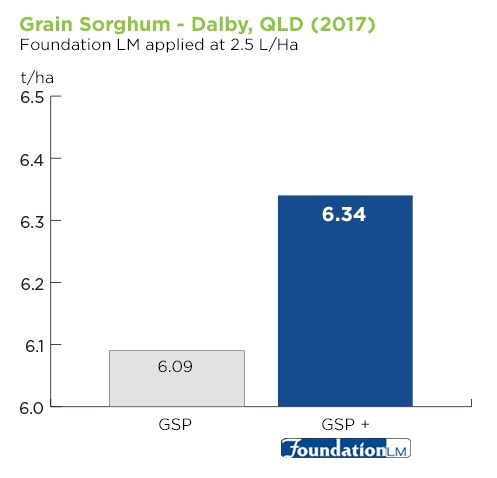 In a side by side trial conducted in Dalby, Queensland, adding Foundation LM (applied at 2.5 L/ha) to the grower's standard fertiliser program led to a yield gain of 0.25 tonnes/ha in grain sorghum. The trial was harvested in July.