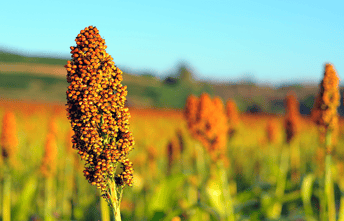 In on-farm trials in grain sorghum, using a starter fertiliser consisting of liquid phosphorus and zinc with Foundation LM led to an average yield improvement of 653.50kg/ha (with an ROI of ~10:1) compared to no starter. The grower had previously trialled liquid starters—ones that did not include the Foundation LM biocatalyst—with no success.

The trials were conducted in G33 variety sorghum at three sites in Gurley, New South Wales. The soil was grey-black vertosol. Starter fertiliser with Foundation LM ("Liquid Boost Start") was applied at 7L/ha with water (80L/ha) and compared to water only (80-100L/ha). Yield data was collected by three S680 headers with GS3 and processed via Echelon. 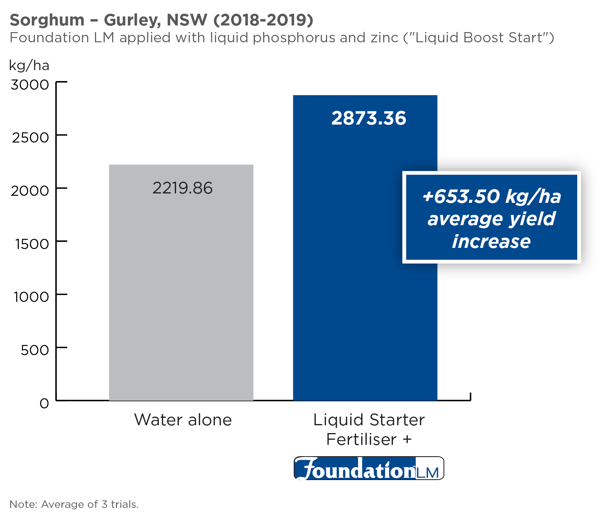 Early on, all trials showed a notable difference in vigour where the starter was used, and the treated areas stood out visually when inspected by helicopter. Although this difference disappeared as the crop grew, the treated heads looked fuller down the rows by the end of the trial. The average treated yield across the three trial sites was 2873.36kg/ha, which was 653.50kg/ha more than the untreated average (2219.86kg/ha).

The NDVI image below shows one of the paddocks in the trial, with a yield increase of 271.17kg/ha where the starter fertiliser with Foundation LM was used. 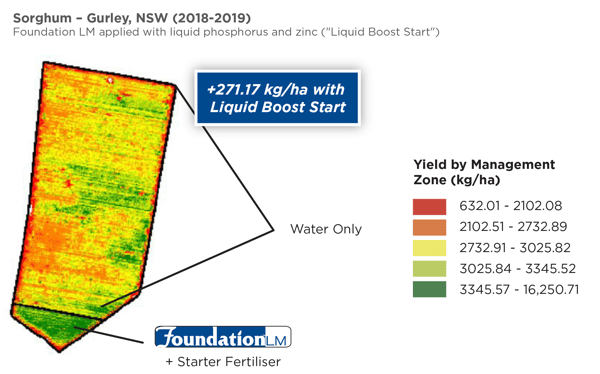 Adequate supply of phosphorus and zinc is critical to crop establishment. By including Foundation LM in a starter program for summer row crops, growers can increase the availability of these nutrients from liquid fertilisers and the soil, while also enhancing crop root development and function.

To learn how a starter program that includes Foundation LM can get your crop off to the best start by making the most of residual and applied nutrients, you can speak to your local Nutrien Ag Solutions agronomist or download a Foundation LM booklet.